Labor in a New Paradigm 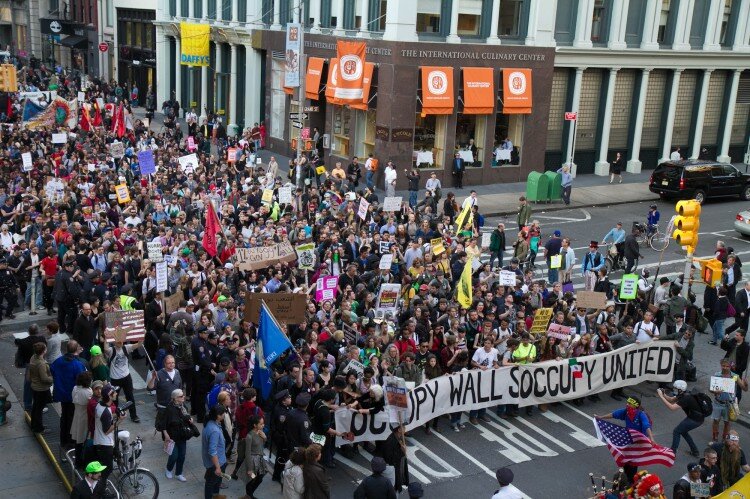 My interpretation of Occupy as a paradigm shift is that things are fundamentally different now that the movement has arrived. Occupy is indeed a paradigm shift beyond this however, If we act as if a fundamentally new era is upon us our actions will contribute to this being a new paradigm, thought and action are intertwined. Occupy has been good at looking beyond what is to a new kind of world that could be.

When it comes to labor however there is a split between the redefinitions and the acknowledgement of what these redefinitions could mean. I hope to clear up the potential that has been unleashed in order to end the problematic idea that something called “labor” somehow by its essence is less radical and less world redefining.

For me May 1st was already a success during the planning meetings. This was because people in their 20’s, many who identify as anarchists, came together with labor activists. However just before May Day organizers broke into different groups to organize according to their interests. This kind of autonomy is crucially important what Chris Longenecker in his article Anarchy and Solidarity on May Day spelled out as the question between “solidarity” and “unity,” with the former being everyone does not have to be on the exact same page while the latter requires agreement by all parties. This is what helps guard against corrosive power. With May 1st over
however I would like to see an Occupy again where traditional labor activists continue to rub shoulders with anti-authoritarians.

We live in an era where the labor movement to a large extent has been crushed. Not long after labor became closer to the federal government during the Second World War did a Republican-led attack result in a host of legal prohibitions to organizing the unorganized. Among these was the Taft Hartley Act, which turned labor unions into complacent organizations restricted by a legal structure that eventually allowed them to be destroyed. Rather than a partisan lesson about the Republicans, this historical episode is better understood as a caution against aligning too closely with the federal government.

One of Occupy’s greatest strengths is that it has built a wide coalition without having to make concessions to institutions that work against the values it is fighting, like the Democratic Party, which receives large donations from Wall Street .The labor movement can perhaps learn from this and not let themselves be cut down by depending on groups that are half allied with interests fundamentally opposed to them.

Many of the disagreements within Occupy about whether to call for a General Strike were based on just this tension. People my age (ourmid twenties) said we want a general strike, and argued that traditional labor is only a small percentage of the nations work force so we need to redefine “general strike” to fit current conditions. Many of us are precariously employed in sectors where there has never been a union and are eager to see how labor could be understood in this current reality. While older Labor activists wanted the definition to stay. While the older labor activist yelled “get off our radical lawn,” the young people yelled “we need to mow the lawn in a new way.” What we need to look for now is a way we can both cut the grass. The
fact that these two groups came together was evidence that we now have interests that are fundamentally similar.

May Day itself however points to this different kind of labor movement that once existed one where anarchists and unionists were one and the same. It shows that there can be a newer, more radical labor movement. A movement that fits the kinds of jobs and conditions many of us young people find ourselves in can be helped
by having an enormous amount of solidarity with traditional labor. This doesn’t have to be a contradiction with something like a call for a General Strike. In fact it would have been best to see a balancing act between massive support for organized labor while pushing radical solutions. The recent victory at Sothebys shows how effective a coalition between Teamsters and Occupy can be.

Occupy Your Work Place a working group that I am a part of hopes to be part of the redefinition of what labor could be within a new era. We currently are trying to democratize the idea of being a labor organizer by developing an introductory organizing training that is short in order to get people bitten by the bug. We have also had many younger workers from the Strand bookstore in our group who already have a union but in the kind of sector that has traditionally been unorganized. The next step is big chain realtors who for too long have been hostile to their employees.

The Precarious Workers Assembly, while not a part of OWS, too saw people coming together to talk about being workers in a context completely divorced from what one would associate with a “Labor Union,” committing themselves to figuring out how more precarious labor could take part in a General Strike. Creating a precarious workers union was also discussed. It is in spaces like these that a new kind of dialogue was taking place, with old values shaken to the core.

Too often when we talk about unions people talk about what Is . What really matters however is what the potential of something is (what ought). Direct Democracy being a central value to the Occupy movement,
occupiers can get frustrated with union’s hierarchical structures. However, unions can be a third decentralized horizontal power source, one that has the potential to be outside government and corporations. This is what OWS and autonomist movements related to the idea of a general strike seemed to be exploring and
trying to re-contextualize.

So Unions are not just about workers rights and benefits -they are also about decentralized power. It's this kind of power that could build an Occupy movement with an even stronger bite. A power to redefine the world we live in to see new horizons with new possibilities develop even more radically than before.