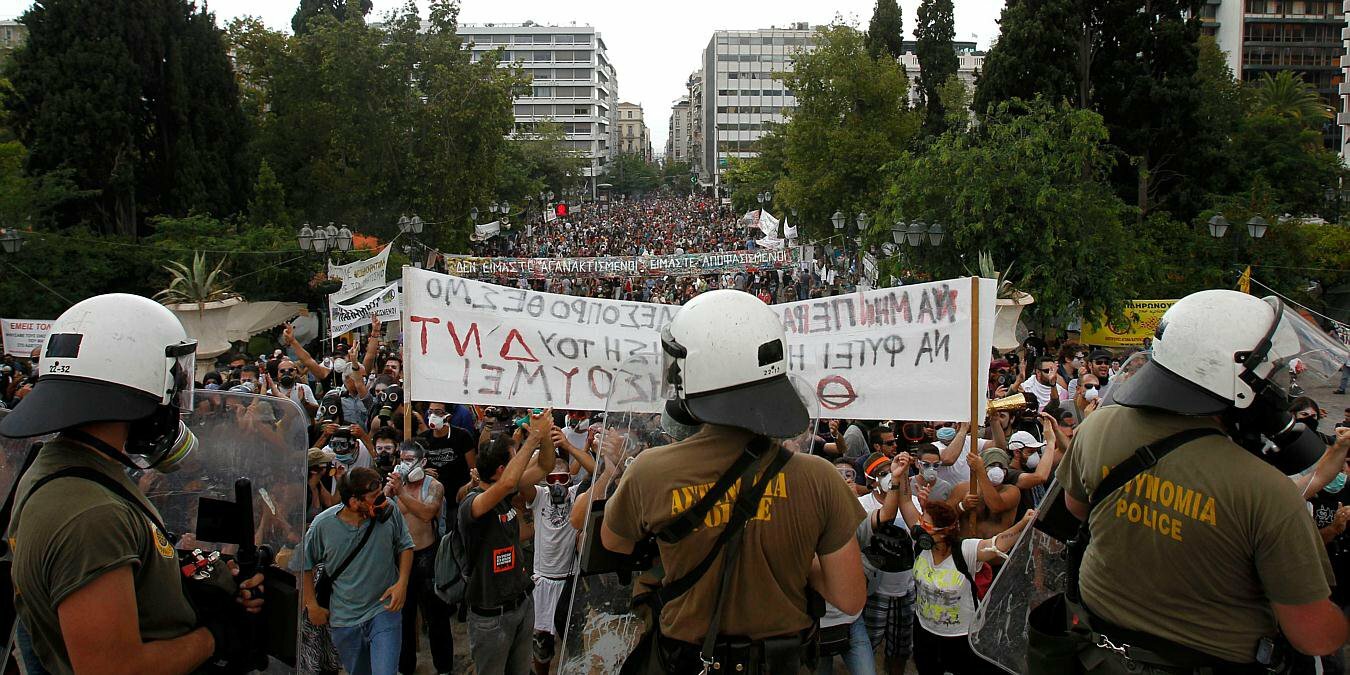 I recently traveled with a team of radical reporters to Greece. There, longstanding illusions of Europe as a “progressive and democratic” force in the world are being dashed as the neo-liberal and imperialist projects that are European Union and the International Monetary Fund bare their fangs.

Thousands upon thousands of public sector jobs have disappeared. Half of Greece’s hospitals are slated to close. We met doctors who had not received their pay in over 6 months. Free access to healthcare is being replaced by free market chaos in which people must rely on bribes and brokers in order to even secure basic services. The old social contract of the European welfare state has come to an end.

Factories are closing shop and moving to other countries where production is more profitable. Uncounted numbers of immigrants from Eastern Europe, South Asia, and North Africa who came to Greece seeking papers to enter the European Union now find themselves stuck in a society where the jobs have disappeared – and where swaggering neo-Nazis are mobilized to attack them on the street.

Public agricultural lands that once provided for the people are being privatized. With those privatizations, agriculture is being replaced with whatever industries are profitable to foreign imperialist powers. Greece is entering a process of neo-liberal specialization, in which its economy is to be warped and disfigured to produce whatever is profitable for global capitalism.

These measures have been met with wave after wave of rebellion. Millions are saying no to this trajectory. Institutions, arrangements and assumptions that once appeared permanent and unquestionable have been thrown into the air. The country is in such profound crises that many sense revolutionary potential. Communism is re-emerging as a name of an emancipatory possibility and road that people can take. Perhaps instead of breakdown, the people will breakthrough.Today, an electoral crisis and the emergence of the radical left have come to characterize Greece in the minds of many people. This is actually the most recent of four moments of intense radicalization in Greek society. 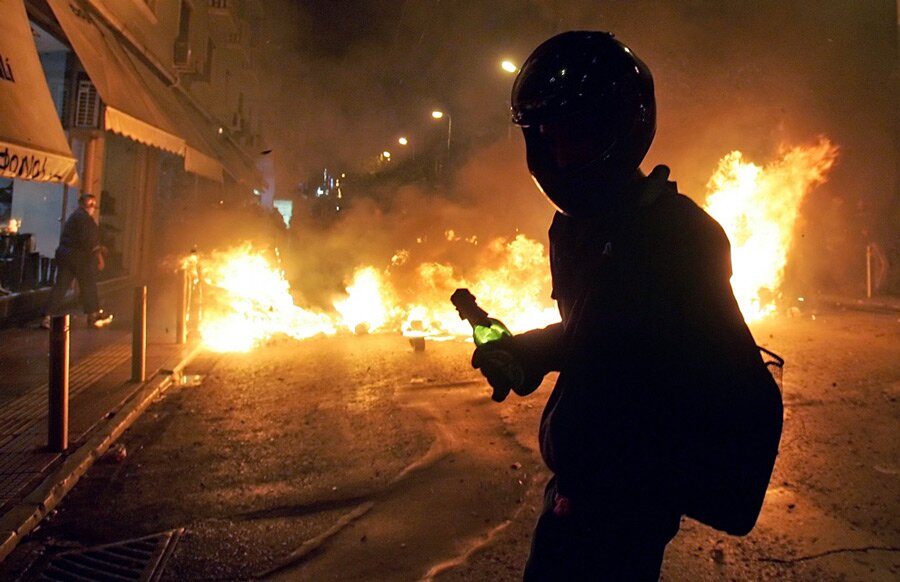 December of 2008 was a winter that forever changed Greece, setting it on fire. The global financial crisis was the kindling, but the match was actually the murder of a young boy, Alexandros Grigoropoulos, by the police. What started as demonstrations and riots in the small sub-cultural community of Exarcheia quickly spread to become a national rebellion. The legitimacy of Greece’s ruling parties was called into question for the first time in decades. The left was polarized, with the anarchists and the more creative sections of the communist movement playing a very important role. Meanwhile, forces that claimed to be on the side of the people, such as the old Communist Party of Greece (KKE), found themselves exposed and isolated. This KKE declared that (in their minds) any “genuine popular revolt will not smash even a single pane of glass.”

The rebellion among Greek people reverberated and grew. In response to loan and austerity programs being imposed on Greece by the European Union, 2010 became a year of mass protests and general strikes with crowds numbering in the hundreds of thousands. General strikes occurred in industries where labor unions had historically been dominated by the PASOK, a mainstream party that postures as social-democratic as it carries out austerity, and that has played a role of co-option for decades in Greece. The political forces of Greek society were realigning.

One year later, on the anniversary of these strikes, Greece’s equivalent of the Arab Spring (and of our own Occupy movement) emerged suddenly and unexpectedly. This “Movement of the Squares” was organized on Facebook by students with no previous political experiences. “People’s assemblies” were called, declaring themselves to be the real democracy of the people, and challenging the legitimacy and rule of the PASOK dominated government.

These demonstrations are one manifestation of a rupture happening within Greek society. For decades, the country had been dominated by two neo-liberal political parties, one that pretends to be on the side of the people, and another that does not even pretend. Greece’s historical legacy of armed guerilla war led by communists against a Nazi occupation had been reduced to World War II nostalgia, represented by the KKE and its aging “voters for life.” Suddenly, all of this was ripped apart. What people believed was possible changed, and what was actually possible changed. The PASOK government came toppling down. The trade unions it bureaucratized were no longer under its control. The people were in the streets, facing extreme police repression while remaining defiant and unafraid.

The three ruling powers that dominate Greece have been called “the Troika,” alluding to the familiar image of a three-horse carriage – in this case pulled by three powerful forces at break-neck speed toward disaster. The three horses of this Troika are the European Union, the International Monetary Fund, and the European Central Bank. The global financial crisis (fueled by the Troika’s own robbery, bubbles, loans, speculation) and the toppling of the PASOK government, all led the Troika impose a special “memorandum.” That memorandum was a document demanding extreme austerity and a Greek government overseen by foreign bankers and technocrats.

The combination of a historic moment of crisis and the resulting mass movement of the Squares didn’t just lead to a rupture in the politics of the larger society, but also a rupture inside the left. Many Left political forces abstained from this mass rebellion. The anarchist movement split over whether to participate in the Squares Movement, with many arguing it wasn’t radical enough to warrant their participation. Dogmatic sections of the Left even protested against the Square, because it wasn’t a movement that fit inside their preexisting schema. A young Greek radical described it to me as follows: 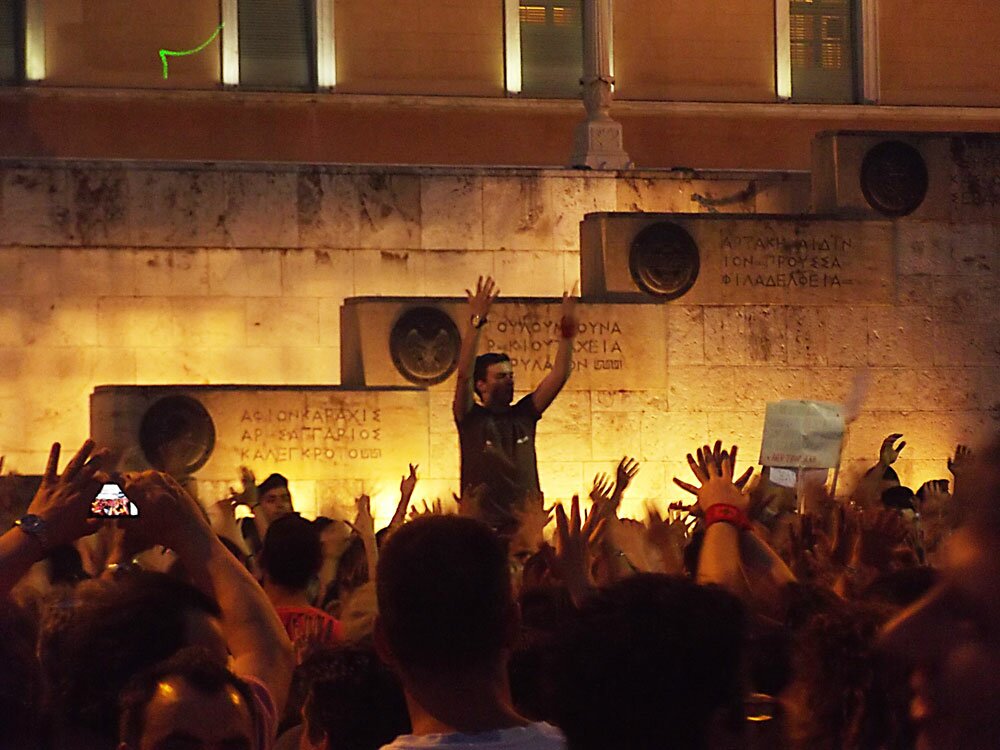 “After all these struggles, the people went to the Squares, our ‘Occupy movement.’ KKE and ANTARSYA [two old orthodox Leftist political trends] would say, ‘You must be active.’ But when there was a major upsurge of the people, they refused to join. Yet for all of their constant activism, they produce no actual new movement or consciousness or changes in society. But the Squares movement brought profound changes in society.”

Meanwhile, participants in SYRIZA, the Coalition of the Radical Left, stood out in making major contributions to the Movement of the Squares. One organization, the Communist Organization of Greece (KOE), a member of SYRIZA, contributed to the development of the movement by creating key initiatives that resolved challenges the movement faced. When doctors lost their jobs because of the austerity, the KOE played a role together with others in organizing doctors to treat people for free in the occupations. The Squares became a place where migrant workers could come to be treated when the racist Troika government denied them healthcare. When the neo-Nazi Golden Dawn came to distribute Greek flags in the occupation, aiming to infuse ultra-nationalism with the Greek Squares movement, the KOE came with the flags of other countries where people are struggling against oppression, including Egypt, Tunisia, and Palestine. From the very beginning of the Squares occupations, the KOE incorporated the image of a helicopter and the slogan “GET OUT!” – making it clear that all they want from government leaders is for them to get in helicopters and flee into exile. The helicopter image has come to characterize a radical pole of the Squares movement.

As a result of all this, much of the Squares Movement has transformed the landscape of the left itself. Those political forces which were once small electoral coalitions such as the Coalition of the Radical Left (SYRIZA) in particular, have become major channels of the resistance, political energy, and engagement of millions.

SYRIZA has its roots as a coalition inside of the anti-globalization movement in Greece, before becoming an electoral bloc. In other words, SYRIZA itself represents a diverse set of radical currents and alliances with inevitable disputes between them. Some forces within SYRIZA imagine a Greece liberated from foreign imperialist power and capitalist logic, and see Greece as a possible spark that spreads such liberation to the rest of Europe. They capture their ideas with the slogan “Another Greece in another Europe.” Other forces in SYRIZA imagine a series of reforms that make the European Union into a progressive force in the world. Today these diverse currents are united but that is not likely to always remain the case.

For now, the whole of SYRIZA has taken a righteous stand against the memorandum and the Troika, declaring its intention to shred the memorandum, abolish the technocratic regime, re-negotiate Greece’s position in the European Union, to refuse Greece’s participation in the wars of imperialism, and to ultimately expel all foreign military bases from Greece. It is a plan which has captured the imaginations and aspirations of millions of people. One third of Greece voted for SYRIZA, and it is said that even more support SYRIZA, but feared that Greece would isolated from the outside world by the Troika, and plunged into extreme poverty if the Radical Left were to be elected. 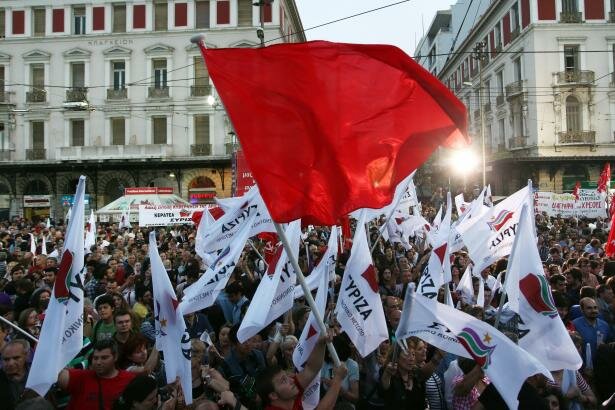 The plans of SYRIZA contain many contradictions and assumptions. For example, it is hard to imagine a future where this kind of program is allowed to be implemented peacefully, with Greece remaining in the Euro-zone, and without some sort of show down or confrontation. This road of radical reform was not allowed peacefully in other societies such as Chile. No doubt the different and opposing poles that exist within SYRIZA will become harder to ignore as the situation evolves.

No revolution is pre-determined or guaranteed. Without a doubt, the differing ideas, practice, and methods of the radical left will pose themselves very sharply in the future. But for now, millions in Greece have spoken: they will not go quietly as their society is crushed by ruthless austerity and global technocrats. Our brothers and sisters in Greece are in the midst of an uprising that mirrors the Occupy movement in many ways, yet at the same time it is ten steps ahead of it. Christos, a young student and revolutionary, said to me “Your Occupy Wall Street movement is so important to us. We can see that this thing is even happening in America now.” If we are to transform this world, we’ll do it together.