General assembly, sparkly hands, consensus, concern, temperature check, block, process: this is the vocabulary and embodied performance of occupy theory. Each word has an equivalent embodied gesture, which is the means of indicating how you’re feeling about a proposal: fingers up for feeling good, horizontal for not sure, down for against.

The strongest sign is raised, crossed arms for a b

lock: an ethical or safety concern over a proposal that might cause you to leave the movement. Proposals are “consens-ed” by facilitators so that a clear majority approve. It’s not always quick but it is always interesting. It’s occupy theory.

Don’t make the phrase into a noun: it’s not a theory of occupation. Occupy theory is what you do as you occupy. It is the process that has become in some sense the purpose of the direct democracy movement, known by its signature instance Occupy Wall Street, or #ows.

On The Moral Nature of Anarchism

Whether it be through the policeman's truncheon or the bureaucrat's pen, authority rules us all. We live in a society with a clear and obvious political, economic and social hierarchy that could not exist without the willingness and ability on the part of those at the top to coerce, manipulate and control those who are not. The horrors that we see perpetuated every day, across the world, is both the consequence of this state of affairs and the means by which it is kept in place.

Read more: On The Moral Nature of Anarchism

De-Provincializing Police Violence: on the recent events at UC Davis

I. Beyond “police brutality”
We should be clear: the UC Davis police used caustic “nonlethal” spray on those student protestors because they could. The institutional entitlement to use such police force, however ill-advised it may seem in hindsight, is neither incidental nor ad hoc—it is systemic, legally supported, and absolutely normal. As we approach the 20th anniversary of the acquittal of five Los Angeles Police Department officers in the street torture of Rodney King, it is urgent to once again examine how police violence shapes our everyday realities in different and contradictory ways.

Why I Step Back

You may be feeling confusion because of how we communicate at the New York City General Assembly and related movements.  I am writing this because it is not the job of traditionally marginalized voices (i.e. female, queer, black, etc.) to educate dominant voices (i.e. white, male, heterosexual, etc.) about systems of oppression.  It is the job of dominantly-voiced allies like me to do so.  We call this “Step up/ step back.”

Read more: Why I Step Back

Dirty Consensus in a Broken World

Is consensus process the key to freedom? I have been pretty convinced that this is the case working my heart out at Occupy Wall st. for the last two months, but my confidence is faltering and it is important to ask why that is. 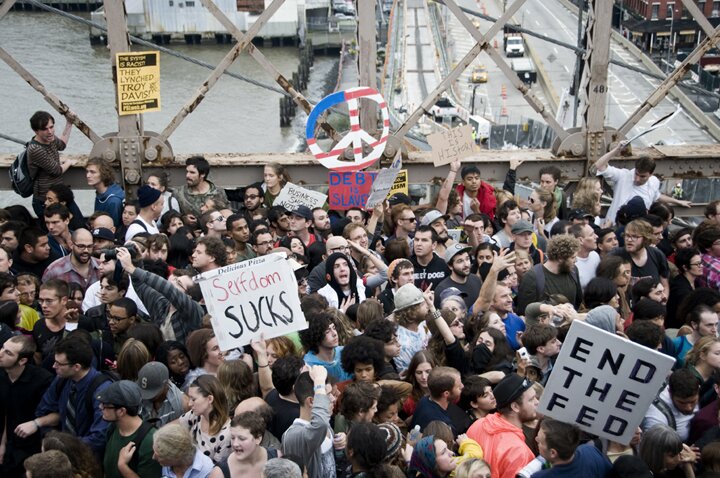 On October 1st I was arrested for the first time in my adult life while standing on the Brooklyn Bridge with about a thousand protesters as part of the Occupy Wall Street movement that was already two weeks old by the time I made my first visit.  I wanted to record the story for my own sake as well as those who want to know what it was like to be there.

First, I want to say that I did not go to the Wall Street occupation hoping to cause trouble or get into a confrontation with the police.  In fact, it was a goal I stated to myself and my wife to avoid, in any way possible, any situations that might lead to incarcaration.  I am 36 years old and I have a 3 ½ year old daughter.  I am not one of those people who seek out controversy or confrontation.  I wanted to go see the occupation.  I wanted to put in a presence to show my support for all those who were a lot more committed to a revolution that I not only believe in but have been waiting my whole life to see.

Towards an American Spring

In the spirit of non-Academic work, that is, work that is relevant for non-academics, I lay out something of an insider’s view on the Occupy Movement (OM) and a strategy going forward. I happily admit that I already see much of this strategy taking place; the ideas are not entirely my own nor are they novel, then again, few ideas are. The important part here is that these strategies can be useful in the most difficult battle—the battle for hearts and minds of the general public.[1] This essay is directed towards those involved with the OM as a way to understand those uninvolved, the bystanders that matter so much for the outcome. The general audience of bystanders is who we must reach.

Read more: Towards an American Spring